Planting Peace on Day 9 in Najaf, Iraq by Steve Clemens

The interpreter called me aside saying, “Mr. Steve, this man would like to ask you a question”, after we had just planted 70 trees in the street median of the Salam District of Najaf, Iraq’s Sister City to Minneapolis. The young man in his 20s, the left side of his face obviously indented and scarred, looked at me and asked through the interpreter, “Do you know a humanitarian organization that can help me [fix my facial injuries]? I was injured by the Americans while I was a student at the University.” I told him I was sorry for his injury and I would ask others when I returned to the US. 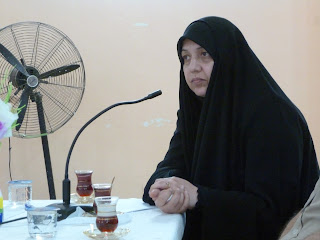 This happened after a busy morning and afternoon. The session in the morning was held at a women’s development organization (NGO) led by Dr. Batool, one of the 25% of the Iraqi Parliament who were elected as women. (The Constitution of Iraq mandates a minimum of 25% females in the legislature.) The women among our Minnesota delegation were hoping for a more intimate conversation about women’s concerns in both Iraq and especially the conservative area of Najaf. However all the interpreters were male and the program was moderated by a man. It was my hope to give the women the space they needed for this important dialog, much of which happened out of my hearing during lunch. 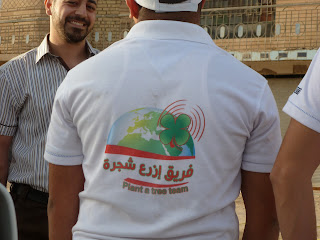 Many of us felt the conversation was cut short in order to leave for our next appointment and then we waited for the trees and the Plant A Tree Team to arrive. But it was worth the wait. When the young people arrived with the 70 Iraqi-type of locust trees (raised in Kuwait), we quickly sprang into action. One man dug a hole in the sandy soil of the median strip between at least 3 lanes of traffic on each side (as if traffic actually stayed in designated lanes!). The holes were at least a meter from the last or next plant. A seedling tree about 12-15” high was removed from the plastic bag which protected the root ball. Then either an American or an Iraqi gently placed the young tree into the hole while the other scooped damp sandy soil around the roots. 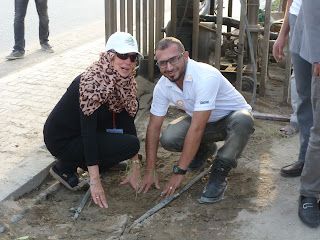 Cameras clicked to capture the moment; traffic slowed to see what was happening; the Plant a Tree members held a sign: “Plant a Tree … harvest peace”. The city manager who helps provide the trees came by to greet us and have his photo taken alongside us and the Team.

After we finished and posed for a group photo, I asked Ahmed, the group’s coordinator and obvious animator if there were any young women who were part of this organization. He smiled a little sheepishly at first and then pointed to the 2-year old daughter of one of his Team who had indeed helped us push sand into the hole and said, “One”. I encouraged him to recruit more. He inquired if there were any NGOs in the US that might partner with them, I told him there are many environmental groups in the US and we should look for them together with our Facebook connections.

I’ve read numerous accounts of US troops bulldozing down hundreds of date palm trees here in their rush to control the landscape and people in 2003. Our 70 trees are just a small symbolic part of our repentance and a beginning journey of reparations coupled with a genuine desire for partnership as we move forward toward a greener and more peaceful world.
Posted by Steve Clemens at 4:30 PM