Letter to Judge on Choosing Jail

When you sentenced those of us convicted of trespassing at Alliant TechSystems on March 27, you gave the defendants a choice of performing mandated Community Service or serving 10 days in jail. At the time of sentencing I felt that I could not choose the jail time without first consulting with my wife and sons, knowing that any jail sentence would also be shared by them by my absence. I have had time to consult with them and to think about the implications about this decision. If the Court feels the need to “punish” us for our act of conscience of warning the public of the illegal and indiscriminate weapons being manufactured by Alliant TechSystems, I am choosing to accept the sentence of 10 days in jail. I’d like to share the reasons why.

As I explained to you at the time of sentencing, my whole life has been committed to being of service to God’s creation. In my employment (working for Habitat for Humanity) and as a member of a faith community (Community of St. Martin), I have deliberately chosen to work and worship with others who strive to make our world a place of peace with justice where all of God’s children can be housed, fed, and grow to their full potential. Service, for me, is not something you can compel me to do- it comes from my heart and my commitment to God and one another. Our act of conscience, a “whistle-blowing” on a corporation that chooses profits over people by manufacturing weapons of horrible death and destruction, was, in itself, an act of Community Service. If the Court wishes to punish that act of service then I accept the jail sentence. In all honesty, I wish I had the courage and commitment of Gandhi, who, when sentenced, requested he be given the maximum sentence allowed by law. It is certainly an attitude to which I aspire while recognizing at this time I am not yet willing to neither sacrifice my job nor put my family through that hardship.

There are several other reasons I am choosing (and embracing) the jail sentence. I do so as an act of solidarity with those in our community who are not given a choice by the courts when being sentenced. Often, in our city, our state, and our nation, defendants who have less education, less financial security, and all too often, those without “white skin” are not given an option by the courts. I am choosing not to accept the white privilege the court offers.

Accepting a jail sentence helps remind my friends, acquaintances, and our broader community of the seriousness with which I take our act of conscience. Others rarely notice acts of Community Service but are forced to think about their own response to the need for acts of peacemaking when they are aware that at least 5 people are sitting in jail for calling this corporation to public accountability. By going to jail, we hope to send a signal of hope to those around the globe who are struggling to rid the world of these weapons that there are some who are willing to struggle with them to make this world a safer place. We hope our going to jail will prick the conscience of others in such a way that they will also find ways to speak out against the evil of profiting over the deaths of others. It is also my way of continuing to speak out against this corporation and my nation whose policy continues to be a willingness to kill innocent civilians to further its intent on world military and economic domination.

You have asked me to notify you in the event that I chose not to do the mandated Community Service and to set a date whereby I would agree to turn myself in to begin serving my sentence. While I would prefer to report to jail on May 20th with my friends, 3 of the Sisters of St. Joseph, who will also do the jail time, I would prefer to begin my sentence on Sunday, May 19, 2002. I do this for two reasons: I have been informed by a caseworker at the jail that I will not be allowed to bring anything into the jail with me, including a Bible, a toothbrush, or even a writing tablet and pen. All such items must be purchased in the jail (although the Chaplain will give me an out-dated version of the Bible upon request) and if I am processed into the jail on Monday, it is likely that I would not have the opportunity to even buy a pen and paper or toothbrush and toothpaste for the entire first week. Secondly, the timing seems propitious: May 19 is the day our local PBS TV station will first air the documentary “Bombies” about the on-going tragedy caused by the cluster bombs made by Alliant’s predecessor, Honeywell, which are continuing to kill and maim civilians in Laos, 30 years after they were dropped. I urge you, Judge McKinsey, Prosecutor Marsh Halberg, and members of the Edina Police Department to watch this film about the consequences of allowing these weapons to be made by a corporation whose world headquarters is located in our county.

Please have your clerk contact me with the necessary paperwork to report to the Hennepin County Workhouse on Sunday, May 19, 2002. For court records, I am listed as Stephen D. Clemens. 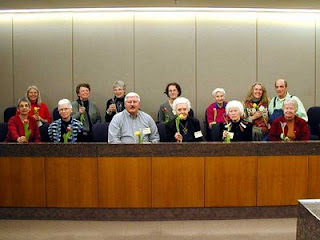 Posted by Steve Clemens at 4:27 PM No comments: