How Does One Unpack From War? 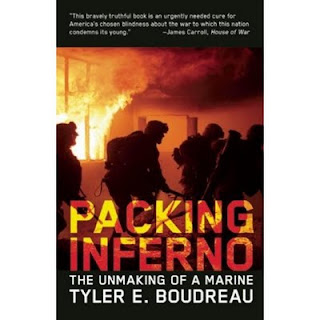 How Does One Unpack From War? - Review of Tyler Boudreau’s Packing Inferno by Steve Clemens. August 18, 2009

Ex-Marine Captain Tyler Boudreau begins his excellent book about his experience in the Iraq War by telling his reader that the old canard, “War is hell”, isn’t true. He tells us that war is the foyer to hell; hell is when you come home from war and have to deal with what you’ve done and what you witnessed in war. And while the Marines can teach one how to kill, who helps the veteran learn how to heal?

I had the advantage of hearing Tyler tell his story on a hot Saturday afternoon, August 1, 2009, at Mayday Bookstore in Minneapolis. Tyler was biking from Seattle to Boston, stopping on the way to tell his story as part of a do-it-yourself book tour for his autobiographical Packing Inferno: The Unmaking of a Marine. He had the build and look of a Marine but his affect during his talk was one of urgency within a gentle, earnest-but-caring style. He spoke with conviction - but without the hard edge I’ve experienced with some other vets who’ve returned from this on-going war.

Part of this might be due to the author’s vantage point: as an officer, much of what Captain Boudreau experienced in 2004-05 in Iraq was second hand. He spent more time in command centers writing reports and coordinating activities for his infantry battalion than out on patrol, at roadblock/checkpoints, and house-to-house raids. He participated enough to write about those experiences but he also gained a vantage point one seldom hears about this war.

Let me share just a few of the powerful observations I underlined in my copy of Packing Inferno.

“The civilians were the same as they were, but the Marines [who just returned home] they hugged and kissed were not the men they had once known. … Our identities were altered [by war].”

“I was a rifle company commander. … I didn’t have the capacity to believe – not in that role. To believe that there could be psychological injuries sustained from the violence we inflicted would be to acknowledge its inherent immorality.”

“… desensitization [in one’s training]doesn’t eliminate morality from the consciousness. It merely postpones cogitation. Sooner or later, when a man’s had a chance to think things over, he will find himself standing in judgment before his own conscience. … Soldiers desensitize themselves in war … they must in order to survive … They push the humanity out of the enemy and out of themselves … one’s humanity can be quite difficult to recover once it’s been evicted.”

“... every [combat wound] rates a Purple Heart. Yet never once has a veteran been awarded a Purple Heart for combat stress. … Only through genuine acknowledgment that combat stress is an injury, not a disorder, can we ever give uninhibited affection to our wounded.”

"In 2005, after 12 years of active service in the Marine Corps and with growing reservations about the war, I relinquished command of my rifle company and resigned my commission. It struck me that, in our headlong pursuit to deliver freedom and democracy and to expel an oppressive regime and combat terrorism, we had inadvertently lost sight of the very people we'd been deployed to help."

It wasn’t obvious to me until I heard Tyler Boudreau discuss his book: each of the nine numbered chapters corresponds to one of the nine layers of hell in Dante’s Inferno. Boudreau does point out that the deepest circle or layer of hell is reserved for “traitors” and I found this section of the book most compelling. The first subheading of this chapter is Loyalty. It has always been the mantra of the Marines: “Never leave a brother behind”. Yet, when Boudreau resigned his commission, when his “brothers” were still “in harm’s way”, it was an act of betrayal according to the Marine code. He was a traitor to that system.

In explaining this new growing consciousness within him, Boudreau read from this section of the book. This is the phrase that stuck with me: “Support for the troops can never be exclusively support for the human being inside the uniforms; it must be to some extent, support for the institution inside them as well. Real severance of those two can only be effected by the soldiers themselves. And that can be a lonesome proposition.”

It is readily apparent in his book as well as his personal appearance that Boudreau retains a deep love and compassionate concern about the men he commanded. His resignation from his commission was personal – he could no longer ignore the immorality of the war – but it was also collective: he could not “spend the lives” of the Marines he commanded on a mission which was impossible. He concluded on the basis of his experience (and analysis) that one cannot simultaneously “win the hearts and minds” of the Iraqi people with men who have been trained to resolve “problems” with killing and violence.

It is somewhat ironic that Tyler Boudreau is biking across America as part of his healing therapy from war. The Bush Administration was often fond of using the biking analogy early on in this war: Iraqi democracy is like learning to ride a bike; we have to “keep the training wheels on” for a little while; we then have to be willing to “let go” to allow Iraqi democracy to flourish on its own …

An important insight this book gave me is that vets need to be able to tell their stories without being lionized. Being called a hero does not give a returning vet the space to process and heal from what he might have already rejected and it makes the shame harder to be released. Boudreau credits the anti-war movement and groups like Veterans for Peace with creating the space to tell stories the general public might not want to hear. But if those stories stay bottled up inside, they continue to eat at and destroy the vet holding on to them.

“Either we allow ourselves to feel that veteran’s pain, truly as our own, and share his consternation about war, or, in an effort to support the troops, we deny the significance of his tragedies and, by definition, we deny his pain as well.”

In looking back over the book, it is hard to find consecutive pages that aren’t underlined or highlighted. This book is well written, insightful, and gives the reader a glimpse into the troubled-but-healing soul of an ex-Marine. I read the book over three days while vigiling in front of the Air Force base where the command for all American nuclear weapons occurs. This was over the 64th anniversary of the atomic bombings of Hiroshima and Nagasaki. Clearly, Captain Boudreau is not the only one of us who needs healing from the denial and destructiveness of our past – and with him, we need to lay down all our weapons and find a new way to solve the “problems” of our world, this time without the violence which dehumanizes us in the process.

[I recommend you check out the author’s website for other insightful articles at www.tylerboudreau.com ]
Posted by Steve Clemens at 11:43 AM No comments: