Have You Been To Jail For Justice? 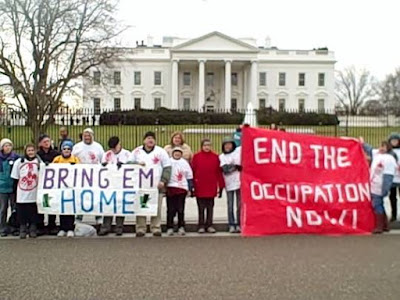 In the fall of 2008 I was in a quandary. Do I vote for a candidate promising hope and change (albeit with a vague commitment to continue the war in Afghanistan and a healthcare reform plan that fell way short of a singer-payer fix) or for one of the others on the ballot who more closely reflected my values in key areas -knowing though there was no chance of their winning, given our two-party stranglehold in US politics?

Well, one year after President Obama’s inauguration, I took the opportunity to “cast my vote” outside his back door. (If the White House address is 1600 Pennsylvania Avenue, then the Rose Garden is in the front lawn but the public sidewalk closest to it is on the north, or back side.)

Thirty years ago, my friends from the Jonah House community invited us to “cast our votes at the Pentagon” since both major party Presidential candidates (Carter and Reagan) were trying to outdo each other on who would better stand up to the Soviets in their invasion and occupation in Afghanistan. So when Kathy Kelly and Voices for Creative Nonviolence announced a Peaceable Assembly Campaign last fall with two weeks of nonviolent protest at the White House at the end of January, I was eager to once again join in.

The campaign draws its name from the First Amendment to the US Constitution where we are guaranteed a right “to peaceably assemble and petition the Government for a redress of grievances”. Our first President warned us about getting entangled in foreign wars yet most of my lifetime has been littered with wars, invasions, occupations, overthrowing other governments, or military threats: Korea, Iran, Guatemala, Cuba, Indochina, Central America … the Cold War, “hot” wars, wars by proxy (remember Reagan’s “Contras” in Nicaragua and his “freedom fighters” in Afghanistan?), wars of economic deprivation (13 years of “sanctions” in Iraq). It is hard to find a time since my birth in 1950 when we didn’t fear a nuclear holocaust, “communist uprisings” to our south, and now the threat of terrorism. Even when we are not fighting wars, we dominate and oppress others through economic means via NAFTA, IMF, the World Bank and other strategies that kill and destroy as much as war. Just ask our Mexican neighbors who used to grow corn. I have a lot of “grievance” against my government’s policies!

So my vote was cast with my body: by laying down in a symbolic “die-in” in front of the home and office of the Commander-in-Chief. No more war. No more occupation. I do not consent.

Of course, such a vote often has immediate consequences: warnings, then handcuffs, followed by “the long arm of the law” - actually, more accurately, selective laws. Property laws, not International Law. Trespassing, not Treaties. In court we are told we stand charged with “unlawful assembly” when clearly our intent was to “peaceably assemble”. We are charged with “disorderly conduct” when we clearly communicated our intent to law enforcement present, conducted ourselves with order and dignity, and fully cooperated upon arrest. The third charge, which was the initial one cited by arresting officers, was “failure to obey a lawful order”. We clearly failed to obey an order to leave the area where we were protesting. On that charge, most of us were willing to either pay a fine, plead guilty, or no contest.

As the saying goes, “if you can’t do the time, don’t do the crime.” But there is another saying, this one from Anne Feeney’s progressive song, “Have you been to jail for justice? If so, I wanna shake your hand.” When you cast your vote with your body, you join a group that includes Gandhi, Dorothy Day, Susan B. Anthony, Cesar Chavez, King, Mandela, and a host of others. While mainstream society prizes a PhD, those who dissent often carry a different alphabet: FBOP (Federal Bureau of Prisons), or DOC (Department of Corrections).

The purpose of jail or prison as I’ve experienced it is designed to remind you that you are not in control anymore. Someone else will decide if/what you may eat, where you will sleep, your movements will be restricted and regimented. When you are released, sympathetic friends say “it must have been hard” – but this is the everyday reality for people of color and the poor in our society. It is good to remind ourselves of that reality – especially white males who are used to being “in control”.

So, “Don’t cry for me, Argentina” – it is your democracy that is at stake. Is it worth (nonviolently) fighting for? Is it worth the time, effort, and discomfort to try to set it straight? What is the psychic cost to us if we don’t act, if we acquiesce?

Jail isn’t the only option. Some “cast their vote” in the Peace Corps, a Catholic Worker House, the soup kitchen or food bank. Others spend their lives and careers healing the sick and caring for the dying. Educating our youth in underfunded and over-crowded schools. Every day these citizens are voting for a better nation with their bodies and minds.

Lest we think that it is only our President (with or without the consent of Congress) that declares war, there is the on-going war on the poor. When the Governor uses “unallotment powers” to strip the needy of medical benefits and slash the budget of the Hennepin County Medical Center, he is declaring war. Some of us need to “vote” at the governor’s mansion. When the bankers and mortgage companies trick and defraud homeowners with impossible-to-pay adjustable rate mortgages – while at the same time lining up for government bailouts – they are declaring war on the vulnerable. We should “vote” in their lobbies and vaults as well.

We need to do a lot of “peaceable assembling” because we have a lot of grievances that need addressing. Don’t leave it to my friends in their 60’s, 70’s, and 80’s. Walk (and lie down) beside them. Let them know they are not alone. If we want a different America, if we want real hope and change, we can’t wait on politicians and “civic leaders”, we must get engaged ourselves. You don’t have to wait until the primaries or a general election to vote. Vote with your feet. Vote in the street. Vote with your money. Vote with your “honey” (or at least a friend) – it’s always good to have someone who shares your values to sit in the back of the paddy wagon with your hands cuffed!

How you vote on Election Day might matter in a close election. (Ask Al Franken and Norm Coleman.) But how you “vote” with your time and resources more fully reveals your true values.
Posted by Steve Clemens at 12:39 PM 1 comment: