It Doesn't Matter If You Should Jail Us 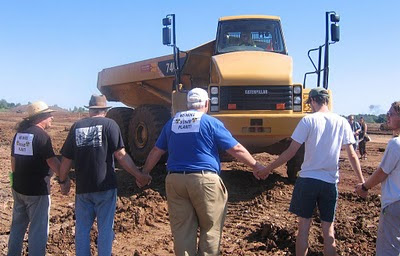 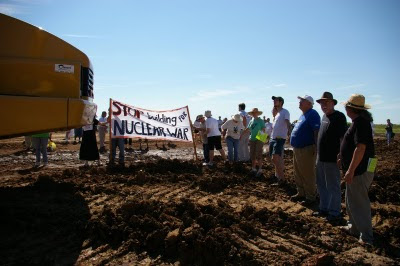 14 of us stood in front of the huge Caterpillar dump truck with our hands outstretched, holding on to one another as we sang, prayed, and read our statement on why we were protesting the building of the first nuclear bomb plant to be constructed in 32 years on the south side of Kansas City, MO.

We sang the South African freedom song: “It doesn’t matter if you shall jail us, we are freed and kept alive by hope …”. We talked with Janice, the dump truck driver after she read a copy of our statement. Neither she nor the nearby bulldozer driver knew that what they were working on was to clear a site for a nuclear weapons plant. She was also unaware of the toxic waste that pollutes the present Kansas City Plant now operated by Honeywell that makes 85% of the non-nuclear components for the US nuclear bomb arsenal.

I hadn’t planned to risk arrest as I traveled down I-35 through Iowa to Kansas City last weekend but what I heard from the locals convinced me that I needed to act as well as speak against this crime. After hearing two retired workers tell about their friends dying of cancers and other diseases after working at the Bendix (and now run by Honeywell) Plant, I was stunned to learn that it was only recently that the EPA was forced to list the site as a source of major toxic pollution. Yet a day-care center remains on the grounds that sit atop this toxic mess. It looks like the federal government (and Honeywell) will walk away from this site once the new plant is built, leaving the local taxpayers stiffed for the clean-up bill.

Speaking of taxpayers, the city government of Kansas City decided to use funds earmarked for urban blight remediation to purchase the soybean fields and trees on the southern edge of the city for this plant with the promise to turn it over to private owners for $10 after 20 years- all under the cynical guise of protecting about 2,000+ jobs.

Presbyterian pastor and local Catholic Worker member (yes, one in the same), Eric Garbison spoke in a loud voice over the dim of the construction equipment this morning to the construction supervisors and the police who had come to arrest us: “I’m a pastor who lives in Northeast Kansas City at 12th and Buford. I heard 4 gunshots last night. There are crack houses and abandoned houses in my neighborhood. The homeless come to our house for food and showers – yet the city government took funds for blighted neighborhoods and use it for this”, as he pointed to the vast expanse of bulldozed land in front and behind us.

“I went to the city council meetings two years ago to try to stop this plant. That is why I’m standing here today, risking arrest, to stay we cannot use this money to build weapons of death.” He, Brian Terrell, and Steve Jacobs had just returned to our group after walking over to two other large construction machines, a power shovel and a bulldozer, to try to talk with those equipment operators while the rest of us tried to engage the dump truck driver we had stopped with our bodies in front of her huge machine.

Garbison told the JE Dunn Construction supervisors and the police, “We want people to have jobs. They could take all of this equipment over to the old Honeywell bomb plant on Bannister and begin to clean that site up.” He went on to inform them that a day-care center remains on that deadly polluted site and asked them if they’d want to have their children to be cared for there. As a father himself, he didn’t want any children exposed to the beryllium, arsenic, and other deadly chemicals being used to make these nuclear weapons.

It is beyond ironic, in fact numbingly stupefying, that our nation can decry Iran’s attempt to enrich uranium for a potential bomb while we continue to modernize our illegal nuclear weapons and extend the life of present bombs for another 40-60 years – all at a time when our President claims a goal of zero nuclear weapons, beginning with the New START Treaty.

Half of the 14 arrested came from outside of the KC metro area: from Des Moines and Malloy in Iowa, from Tuscon, AZ, Columbia, MO and Minneapolis. The other 7 were from Kansas City, primarily from two Catholic Worker communities that live and serve among the poor and marginalized. They see a direct connection between the neglect of human needs and the obscenity of dumping billions into the troughs of arms merchants. Committed to a faith-based nonviolence, these activists chose to risk time in jail rather than to allow this plant to proceed without protest.

The developer, Jim Cross, pleaded with us to walk away from his earth-moving equipment so his workers could resume, promising us “cold drinks and a place to sit and talk in the shade”. “I don’t want to have you arrested”, he claimed as he returned three times asking us to leave before the police put us in handcuffs and drove us downtown. We were booked on trespass charges and released with a court date on October 7.

Statement carried by the 14 and given to workers:

We are gathered today, August 16, 2010, at the site of the future nuclear weapons production plant in Kansas City, Missouri, to protest the continued manufacture of U.S. nuclear weapons.


We also denounce the existence of the current Kansas City facility, where 85% of the non-nuclear components for the U.S. nuclear arsenal are produced, and demand its closure and clean-up.


The current plant and the future plant threaten the health and well-being of workers, our environment and the Kansas City community. The new plant is the recipient of funding by the city government through the explicit misdirection of funds intended for the improvement of urban blight.

The 1970 Nuclear Nonproliferation Treaty requires an end to all planning, preparation, production, threat, or use of nuclear weapons and adherence to the fundamental rules and principles of Humanitarian Law. Further, ratified treaties are enshrined by the U.S. Constitution as supreme laws of the land. Building the first new U.S. nuclear weapons production facility in 32 years is in obvious violation of these laws.

The cardinal rules and principles of humanitarian law require that civilians never be the object of attack and prohibit weapons that are incapable of distinguishing between civilians and military targets.

The International Court of Justice found that the destructive power of nuclear weapons cannot be contained in either space or time, and nuclear weapons have the potential to destroy all civilization and the entire ecosystem of the planet, and thus are illegal. In keeping with the Nuremburg Principles, we choose to act nonviolently rather than be complicit.

The intended use of the new Kansas City Plant is to improve and extend the life of nuclear weapons. Any complicity in planning, preparation, threatening to use or use of these weapons is a crime against peace, war crime and crime against humanity.

Under principles of democracy we exercise the right of every citizen of this republic and this planet to peacefully resist the nuclear threat that attacks every core concept of human rights.

We act to exercise our basic rights to life and freedom from violence and we exercise our duty to protect children and future generations.

We act to ensure that our government fulfills its promise and responsibilities to unequivocally pursue and achieve nuclear disarmament in good faith.

We call on national, state and local Kansas City government to end the use of our tax dollars to wage permanent war and demand clean-up of all chemical and radioactive contamination.