John Heid in the Courtroom

For the past 3 days, John Heid and Eddie Bloomer were on trial in Hennepin County Courthouse for the arrests at the Black Lives Matter/Twins Home Opener/Catholic Worker Faith and Resistance Retreat action last April. This was the final in a series of 5 trials, which concluded in two acquittals, dismissal of charges against many of the defendants, the conviction of 8 who requested jury trials and the acceptance of a plea agreement for others. (I was in this latter group due to the uncertainty surrounding my dying father’s situation – not wanting to be in the middle of a 3-day trial at the time of his passing.)
It was a great honor to sit in on at least parts of 4 of the trials and hear the clear testimony of fellow codefendants describe why they took part. Although much of the trials focused on technical legal minutiae like where exactly were you standing (were you technically on “Metro Transit property”?) instead of the message we were trying to convey, defendants who were eager to take the stand tried to embody the signs we carried: “White Silence Equals Violence” by breaking silence around the police killings of Jamar Clark and other black young men in our metro area.
Yesterday and today, John Heid, going pro-se (representing himself rather than using a lawyer for defense), spoke clearly and passionately. It was difficult to take notes because so much of what he said was note-worthy. Here is the gist of what I wrote down.
·      The conscience of the community is an essential part of a democracy.
·      He is committed to Kingian nonviolence – following the practice of Martin Luther King, Jr.
·      My intent was to raise awareness [of the public] when all other attempts seemed to have failed.
·      King teaches us to “raise the tension” –create a “creative tension”. This process is not an easy or painless one; it is akin to “lancing a boil- in order to get to the infection” and begin the healing process. The cancer that must be addressed in our body politic is racism exacerbated with notions of white supremacy throughout our nation.
·      We take a “civil initiative” (some use terms such as “civil disobedience” or “civil resistance”) to both pressure our government and its “leaders” as well as take personal responsibility ourselves when the state has failed to right an injustice. As a Quaker, John stated he had “civil responsibility” and as a citizen he has a “civic responsibility”.
·      Conscience must inform our view of the law. There are times (such as now) when “we have to leave the comfort of the sidewalk for the dissonance of the streets” – referring to being willing to risk arrest rather than just holding a sign on the sidewalk or leaving the street after an arrest warning is delivered. “I don’t just go into the street to raise havoc”, he stated, explaining his principled commitment to nonviolent direct action attempting to address social injustice. “When lives are at stake, laws need to adjust accordingly.” Sometimes one has to violate a law like rushing into a burning building to save lives despite trespass codes. “Racism is that fire today and it is burning down our houses and destroying our souls.”
·      “What is important is not where I stood – but rather what I stood for”. This, in response to Prosecutor Patrick Marzitelli’s attempt to get John to admit that one of his feet might have been on “Metro Transit property” in a photo the State entered into evidence. Although I’m certain John was not technically “trespassing” at the time the “leave or arrest” warnings were given – (he had moved further away from the light rail tracks as the vigil/protest progressed) – he wanted his emphasis to remain on what he stood for – and why- rather than exactly where his feet were planted.
·      Telling the jury that we can’t build a nonviolent world using the tools of violence, John called out the names of Jamar, Philando, and Cordale – “may they rest in peace; a peace they never found in these cities”.
·      At the closing arguments, the Prosecutor told the jury they were to consider “just the facts and the law” -oh, and “common sense” , setting aside their feelings and sentiments about the Black Lives Matter movement or anything else. To which John Heid, when his turn arrived, countered with “You [the jury] are to be the conscience of the community”. You have a responsibility – the ability to respond. “You, today, are acting as the soul of this community.” My intent, John stated clearly, was to take a claim of responsibility for the troubles of our society. I was trying to prevent further harm and address the harms of the past. It was my conscience that brought me here- not a criminal intent. WHY I stood where I stood informs my intent.

Posted by Steve Clemens at 7:36 PM No comments:

My Dad, The Diplomat 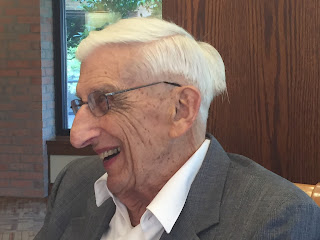 Not many years had passed since the demagoguery of Senator Joe McCarthy when President Eisenhower embarked on what he called “People-to-People” diplomacy. I don’t know the details because it happened before my teenage years but my father set aside his butcher’s apron and knife to travel with a group of other business leaders to East and West Berlin and Moscow.

Dad returned home with photos and stories of the stark contrasts between grocery stores from “the East and the West” but what I remember most from that trip was not the bravery it must have taken for my Dad to travel to the capital city of our “national enemy” but rather the fact that he brought home seal-skin hats that we had seen many Russians wore in the winter in the National Geographic photos we looked at as kids.

I sit amazed nowadays at the courage he embodied to take such risks. We regularly read the virulent anti-Communist propaganda tracts put out by the John Birch Society so to be seen by others as one who would travel to meet “the enemy” was in reality, my Dad’s embodiment of the Jonah story. Nineveh was the Moscow for Jonah and I’m sure my Dad’s theology probably included Jonah’s “repent or risk divine destruction” message even though in those days I think it was forbidden for him to take his Bible “behind the Iron Curtain”.

I do remember our church supported some missionaries who “smuggled Bibles” to the people ruled by “godless Communists” but wonder now how my father’s friends and work colleagues reacted to his willingness to travel to the enemy’s home turf unarmed as a people-to-people diplomat. I wore that beautiful seal-skin hat with pride – after all, it was a novelty and it fit in well with the “coon-skin Davy Crockett” hats my brothers and I wore a few years before.

Dad left school after the tenth grade to help in the family butchering business. He was very proficient with the knife – from boning out hams at work to showing his sons how to skin a rabbit or gut a deer on our hunting adventures. It is easy to remember those typically “macho” scenes of a father and sons bonding together while fishing or hunting but from my vantage point now of fifty-five plus years later, it is his willingness to stretch out his hand to embrace an enemy is a memory I want to cherish.

Rest in Peace, Dad. Your lessons to me as we sighted-in our shotguns or rifles before going hunting in my teen years always came with your proviso: “never, ever, point your gun at a human being; never shoot anything you don’t wish to kill; and eat what you kill.”

It was those messages in the back of my mind when I turned 18 and registered for the military draft and fired the rifle assigned to me on the Wheaton College ROTC rifle range that caused me to declare I was a Conscientious Objector as it dawned on me that my targets were no longer pheasants, deer, or rabbits but rather “Viet Cong”.

You never bragged about your role as part of what our culture deems “the Greatest Generation” as you followed General Patton’s troops through France and into Germany trying to recover the bodies of dead and wounded GIs off the battlefield as German snipers aimed at the spotlight you operated. I never got the message from you about the heroism of going to war – even against the Nazis. Granted, you were only in your early 20s and I remember how invulnerable I felt at that age. But real courage was modeled for this son by your un-armed attempt at diplomacy to those you saw as “trapped behind the Iron Curtain.”