Passing On the Torch

Passing On The Torch From The Geriatric Generation by Steve Clemens. January 15, 2012
In one week in early January 2012, the Twin Cities peace community lost Dr. Gene Ott, age 82, and Marv Davidov, age 80 after months and years of failing health. This same week saw two of the famed four McDonald sisters, Kate and Rita, along with their fellow faithful protesting compatriot, Marguerite Corcoran move into a senior retirement center just a week after their most recent court appearance for yet another act of civil disobedience. That court appearance at the Fourth District Courtroom at Ridgedale stemmed from the final action of a 16-year campaign directed at war profiteer Alliant Techsystems before it moved its corporate headquarters to a spot less than 5 miles from the Pentagon.
One of the defendants in that case entered the courtroom using a walker; two of the defendants have Parkinsons. Another defendant was unable to appear because of a follow-up medical treatment for his cancer. This scribe, at age 61, was the youngest of the 12 defendants and the only one not presently covered by Medicare and Social Security. Just two days after that court appearance another defendant fell down a flight of stairs in her own home and while badly bruised, fortunately didn’t break any bones before being driven away by the EMTs.
At the weekly Lake Street Bridge vigil, 98 year-old Elmer faithfully holds up his “Bring the Troops Home Now” sign each week, no matter what the weather, after visiting his wife in a local nursing home. Several other Sisters of St. Joseph of Carondelet haven’t been able to join us for the past couple of years due to health issues brought on by aging and one of the main organizers of local vigils has suffered a stroke and has now been diagnosed with cancer at age 83.
Even the annual Veterans For Peace-sponsored bus journey to Ft. Benning, GA to the “Close the School of the Americas” rally and vigil is getting to be too strenuous a journey for many of the local peacemakers. At least when we arrive 24-hours later at the gates of this huge military training base, the SOA Watch organizers now have chairs set up near the stage so some of us can rest our weary bones.
When the EMTs were summoned to the Alliant Action vigil this past August after one of us collapsed, we should have seen the handwriting on the wall: we are no longer “spring chickens” and will need replacements soon. Before we walked up the driveway to sit in front of the main entry doors at Alliant Techsystems, one of the 86 year-old nuns told me, “This might be the last chance I might have to get arrested with you.”
How wonderful to see a new generation step forward calling themselves “the Occupy! movement”. Other young people are part of the Anti-War Committee and some students have banded together under the banner of Students for a Democratic Society, reviving the SDS movement from its Vietnam-era origins. As we mourn the losses within our stalwart community, we are eager to help mentor and accompany the next generation of activists seeking nonviolent solutions to the challenges ahead of us. Who will take Marv’s place in telling stories from the peace movement to the Active Nonviolence class in the Justice and Peace Studies program at the University of St. Thomas? Who will fill the enormous shoes of Dr. Ott in making the links between healthcare justice and peacemaking? One doesn’t need a long resume to join us; we’ll help you fill in the details as you stand beside us on the street corners and in the courtrooms and we’ll stand beside you at the People’s Plaza, the FBI headquarters, and homes facing foreclosure. Together, lets continue to be the change we hope to see in this world.
Posted by Steve Clemens at 5:13 PM No comments: 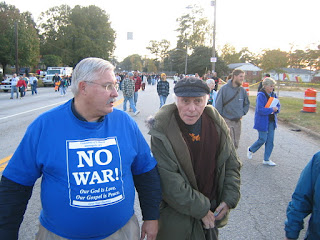 Remembering Marv by Steve Clemens. January 14, 2012
I moved to the Twin Cities after the Honeywell Project years so it took me a few years before my path crossed with Marv Davidov. It seemed to me that everyone involved in peace and justice protest in the area had worked with Marv at some time or other. He was a thorn in the side (or, more accurately, a pain in the ass) to those in authority who wished to protect a status quo which trampled the rights of the poor or marginalized or used military force against others. As one friend remarked to me, he was also a pain in the ass to many of his friends as well.
“A prophet without honor in his own home town” was an observation about another Jewish agitator a couple of millenniums ago; he ended up crucified by governmental authorities who wanted to repress his message which they thought was subversive to the empire. And what a subversive Marv was! Marv bristled at any sign of injustice and was quick to let you know his mind – but it was always tempered with his incredible sense of humor and his smile and laugh.
Marv gave me his blessing just before I went under the fence at the School of the Americas protest in 2005 and he told Christine I needed a proper reception when I was released from Federal Prison afterward so he, she, and some other faithful friends greeted me with a banner and noisemakers as I stepped off the Greyhound bus in my new prison-supplied clothes in 2006.
Carol Masters so wonderfully captured many of Marv’s adventures in the book she wrote with Marv (You Can’t Do That: Marv Davidov, Non-Violent Revolutionary)http://www.amazon.com/You-Cant-That-Non-violent-Revolutionary/dp/1932472894/ref=sr_1_1?s=books&ie=UTF8&qid=1326573991&sr=1-1 and it is great that this agitator for peace was able to be lionized before his passing. He loved being able to give readings from the book and then would embellish the story Carol had recorded with additional details and memories.
Thursday morning while visiting him at Walker Methodist Health Center, I told him I was stepping out of the room so one of his care-takers could change his dressing. He grabbed my hand, smiled, and said, “I love you, Steve” and I returned the sentiment. He knew his time was rapidly approaching and he dared not leave any loose ends. As I think of this brother with many fond memories, one of my favorites was his story about standing naked in the shower at a health club and his conversation with an FBI agent. If you don’t know it, get Carol’s book and enjoy some of the many adventures and stories of my friend and mentor.
Rest in peace, my brother. [Marv died about noon today]
Posted by Steve Clemens at 2:48 PM 1 comment: