A Mostly Minor Injustice Reveals The Evil Beneath

Posted by Steve Clemens at 10:56 AM No comments:

Thoughts on Obama and the Zimmerman Acquital

Posted by Steve Clemens at 4:04 PM No comments:

Anything to Celebrate on the Fourth of July?

Red, White, and Black: Imagining “Independence Day” as an Anti-colonialist Event by Steve Clemens. July 4, 2013
My morning started this “Independence Day” listening to Amy Goodman and her Democracy Now! program recount the heroism of Daniel Ellsberg, Senator Mike Gravel, and the Unitarian publishing house, Beacon Press, in “blowing the whistle” and releasing the Pentagon Papers in an attempt to end the war on Vietnam by our government – comparing their acts of courage and conscience to that of Bradley Manning and Edward Snowden today. Later, I spent an hour reading from What Does Justice Look Like? by Dakota author and historian Waziyatawin and then watched the film “42”, the story of Jackie Robinson in breaking the color barrier in professional sports in the United States. It got me thinking about why the July 4th holiday has always been a bittersweet experience for me ever since I became politically aware.
The origins of the myth surrounding the national holiday proclaims the heroic struggles against the colonial domination of the British Empire by individuals and groups willing to risk life and limb to be out from under that system they felt was oppressing them. Throughout the struggle of white colonists in the North American continent, the Indigenous Peoples were cast aside or embraced as allies depending on who the “enemy” was considered to be at that time. Blacks were imported for economic and political reasons and again were considered mere after-thoughts by those declaring their “independence” from King George and his army of Red Coats.
What if, in declaring the end of cooperation with the British colonizers, our “Founding Fathers” [sic] sought interdependence and an end to domination instead of replacing one dominating system with another? What if we saw the Iroquois Confederation or the Delaware/Lenape Nation as peoples to emulate instead of conquering? The Africans who survived the Middle Passage and then sold on the auction block had little to celebrate on July 4, 1776 and given the hostility of the present Supreme Court, not a whole lot more today as their numbers disproportionally fill our jails and prisons. What if the fever of independence from colonialism was allowed to spread among them as well as the whites?
Well, even among the whites, the independence was rather restricted to property-holders and males as far as voting power, even if the benefits of white privilege spilled over to those whites without property and votes.
So does one celebrate the very-limited myth of this holiday with hope and determination to broaden its application - or does one refrain from the public hoopla to deeply reflect on the pressing needs to reclaim a spirit of true anti-colonialism and recommit to continue to nonviolently struggle to resist projects of domination?
The local corporate newspaper (helpfully) reminds us that the anticipated fireworks over the Mississippi River tonight might cause distress to many of our recent military veterans who returned from their deployments with PTSD. The article failed to note that our visiting guests from Minneapolis’ Sister City, Najaf, Iraq, might also have the same reactions - having been on the receiving end of “Shock and Awe” and other such “fireworks” that were designed to continue our latest adventure into domination.
Not watching the fireworks, not flying the Stars and Stripes, not standing for the National Anthem as it is played at virtually every sporting event and many other public events doesn’t seem to me to be enough. If I want to derail the continued colonizing of peoples within and without our national boundaries, merely being silent or sitting is still too complicit. Waziyatawin argues that we need to decolonize our minds by “tearing down the fort” both physically and metaphorically, referring to Fort Snelling, the symbol par-excellence of the domination and genocide of the Dakota people in the land we still call Minnesota, if we want to embrace justice and truth-telling on this day in our nation’s mythical story.
As with our celebration of Martin Luther King, Jr. on his holiday, “Independence Day” needs to be less of a “day off” and become rather a day of recommitment. This time, however, with a broader inclusiveness and a determination to end the project of colonization and domination of others.

Our Military-backed Exceptionalism. By Steve Clemens. May 5, 2013

One would be hard-pressed not to see the enormous fetishizing of the U.S. Military since the attacks of 9/11/01. Whether it is at professional sports events, airports, political rallies, or even at local restaurants, it seems almost impossible to avoid signs, speeches, discounts for, symbols, or outright worship of those now labeled “heroes” – the backbone of our national identity – our warriors.

It was bothering me for several days after a recent trip to the local Hardees restaurant chain. The friendly clerk took my order and then asked me if I’d like to “donate a dollar to support our troops”? On the counter was the details of the promotion: “Stars for Heroes” where in exchange for my $1 donation to “support military veterans and their families” I would receive $10 worth of coupons for discounts at the restaurant and they’d place my name on a paper star recognizing my support and gift which would be placed among the hundreds of other stars already on display along the windows facing the parking lot. I declined; but I debated with myself as to whether I should tell the young clerk why. She was enthused about the program because that franchise was in competition with other franchises around the state or region according to the conversation I overheard among the staff. Who was I to rain on their parade?

And still we sit and wonder how someone like the Tsarnaev brothers or others could get “radicalized” and be (allegedly) led to commit such heinous acts as the Boston Marathon bombing?

Several weeks ago I heard a senior high-ranking Pakistani Police Officer (and Humphrey School Fellow scholar), Mubarek Zeb lead a presentation about U.S. drone attacks on the remote tribal areas of his country. He explained the cultural honor codes of the Pashtun tribes and how those traditions going back thousands of years made them honor-bound to seek revenge for the death or injury to tribal members or those granted hospitality and asylum in their homes. He told us that for every person killed or seriously injured by drone attacks, between three and ten tribal members were committed to lifetimes of retaliation and revenge.

Several years ago an Iraq War Veteran, Tyler Boudreau, travelled through Minneapolis while biking across the nation in his attempt to heal from the trauma of war. In his excellent book, Packing Inferno, as well as his talk at Mayday Bookstore, this former military officer decried the use of the term “hero” stating that it hindered the healing of (psychologically) wounded vets who knew the reality of war and knew that the acts of killing and occupation were mostly far from heroic and often bordered on cringe-worthy if not outright criminal. Karl Marlantes, author of the equally-excellent What It Is Like To Go To War, also cautions his audience to understand the cost to the human psyche in sending others to kill in our name or for policies decided by politicians determined to use (and abuse) the power entrusted to their office.

We continue to cheapen the true sacrifice forced on military veterans with gimmicks which cost us little (“it’s only a buck!”) and promise us a return on our investment (you’ll “support or troops!” and get coupons worth a whole lot more!). At the restaurant I had brought along the latest book I’ve been reading, James Cone’s now classic, The Cross and the Lynching Tree. As I thought more about the clerk’s request for the modest “donation”, I flashed on how those on the receiving end of the lynching rope, the Dakota survivors of the genocide of our “Indian Wars”, my Iraqi friends who were traumatized by US military checkpoints just a few years ago, or my Afghan friends who continue to fear drones and helicopters when they go to the mountains to fetch fresh water or firewood would respond to the uniformed protectors of American Empire now labeled “heroes”.

When Jesus encountered Roman occupying soldiers as he was growing up in occupied Galilee, did he see them as “heroes” – those who ending up lynching him for the benefit of those engorging themselves on the spoils of war and domination? How did Spartacus and other slaves view the legions sent to put down their rebellion? I’m sure members of the Roman elite were grateful for their military who allowed them to continue in “the lifestyle to which [they’ve] come to be accustomed to”. We continue to be so blinded by the disease of American exceptionalism that we fail to think about how much of the rest of the world views us.

American exceptionalism rides on the back of American Empire and White Supremacy. James Cone reminds us that until or unless we renounce the latter, our “Christianity” will continue to “re-crucify” the one we claim to follow as millions of young black men waste away in our prisons. The 150th anniversary of the Dakota War reminds Minnesotans that conveniently “forgotten” (if never learned) history continues to create victims and unhealthy dependencies today. Our visitors from Iraq are genuinely perplexed about our wall-to-wall obsession with the latest news about the actions, capture or killing, and the impending trial of the alleged Boston Marathon bombers while ignoring the on-going terror-laden bombings happening weekly, if not daily, in their own country. A country where such “suicide attacks” were unheard of prior to our military invasion ten years ago.

I find myself tired in this post 9-11 soup of fear and chaos of feeling I must always do battle with our “mainstream” culture for its jingoistic “patriotism” and desire to continue on with “the lifestyle to which we have become accustomed to”. That lifestyle which is enforced and protected by young people enticed to put on the uniform and grab a gun. As long as those guns are pointed at others (and on our behalf), we can wallow in the notion that “God has blessed us” and we deserve to be exceptional from the rest of humanity. We don’t look at the crosses, the lynching trees, the dangling nooses, the closed prison doors, and the persistent humming of the drones overhead. I’m getting a better sense of how racial, sexual, and religious minorities must feel here in “the land of the free and the home of the brave”.

Excuse me, but in choosing to follow one executed by the powers of political, religious, and military empire, I must continue to find creative ways to dissent – and then stand side-by-side with those marginalized in the process.
Posted by Steve Clemens at 11:44 AM No comments:

Trying Not To Stick My Head in the Sand 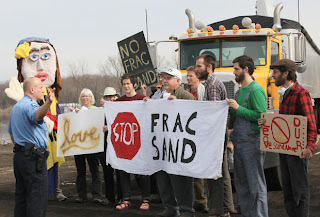