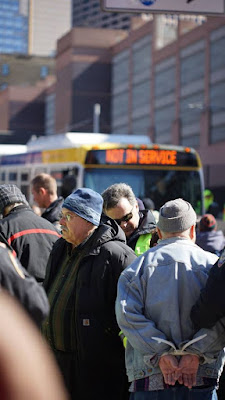 To the casual observer, the sight might have been striking to a proponent of “American exceptionalism”: 25 activists who appeared to be white according to our nation’s obsession with racial identity, arms linked together, taking instructions and directions from a group of black women. Blocking the tracks of the Light Rail transit system as well as two adjacent streets, this action shut down the traffic outside Target Field for the Minnesota Twins home opener.

On the other side of this publicly funded stadium, another group of Catholic Workers and local faith community leaders were being led by another group of women of color in blocking a different intersection as some dropped a large “Justice 4 Jamar” banner from the over-looking parking ramp by the main entrance to the ball park. Inside, as the National Anthem was being sung, two additional activists hung banners over the large black wall in centerfield. They read, “ Re-open Jamar’s Case” and “Target Field: End Your Slave Labor.” 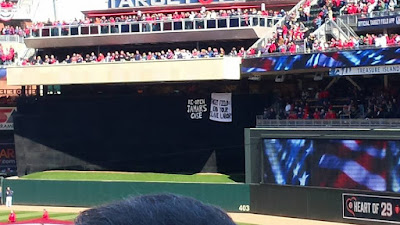 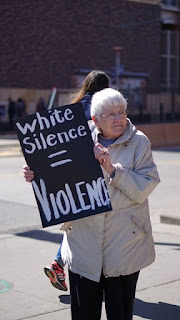 Back outside, signs reading “White Silence = Violence”, “White Silence Kills”, and “White Silence Killed Jamar” were directed at the predominately white-looking crowd attempting to enter the stadium. Some shouted encouragement, others angrily “flipped us the bird” or yelled for us to “Get a Job!” We sang, and chanted, led by our cadre of brave black women until the police issued their third warning to leave under threat of imminent arrest for trespass. Our leaders from Black Lives Matter Minneapolis and the Black Liberation Project moved to the sidewalk with the others who had served as marshals as the police started to handcuff those of us remaining who were blocking the train and the street.

Less than two weeks before, my wife Christine and I were invited to be part of a walk along the Minnesota River led by Ojibwa elder, Sharon Day. The women carried a bucket of water drawn from the source of the river in west central Minnesota to be poured back into the river at its confluence with the Mississippi at a place called Bdote by the Dakota people. I was honored to carry the eagle staff behind the woman carrying the copper pail. We prayed for the river, thanked her for her gift of life to the land. We offered tobacco at ceremonies at the beginning and ending of each day of the walk with a moving ceremony at the conclusion of the walk on Friday near the repressive reminder of Ft. Snelling and it’s 1862-63 concentration camp for Dakota women and children. On Wednesday of the walk, we passed the memorial where 38 Dakota warriors were hung by the US Government in 1862 and while the tears and sadness of the memories from our past lingered as we walked, the river, fighting the pollution caused by industrial agriculture run-off, kept calling us to continue our prayerful journey. As the young Native girls threw an offering of corn, berries, wild rice, tobacco and other traditional symbols tied in a red cloth into the river at the end, two eagles circled overhead. I remembered a Native friend who told me that “eagles circling” are carrying our prayers to the Great Spirit. 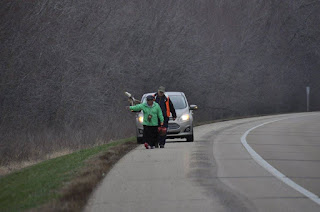 In another two months, Christine and I will join some Muslim friends at an Iftar – the meal to break the daily fast during the holy month of Ramadan at a local mosque. We have done so for the past several years as a way for Christians, Jews, Muslims, and others gather to help break down the stereotypes and walls that often divide Americans. I remember how pleased my Iraqi friends were when our delegation visited the Holy Shrines in Karbala and Najaf, Iraq several years ago.

“Embodied solidarity” is a term used by a Wheaton College professor, Dr. Larycia Hawkins, as she donned an hijab during the weeks of Advent as many Muslims were being vilified in the media at the instigation of some Presidential candidates as well as religious “leaders”. She wanted to show with her body her oneness and connectedness to those often seen as “the other”. It cost her her job at the college, my alma mater after a storm of protest arose from the broader “evangelical” community. I already had many of my own reasons for distancing myself from Wheaton so this merely added to my list of grievances. But I am thankful for her witness and example. I, too, want to place my body in alliance with peoples pushed to the margins in our society, culture, and nation. 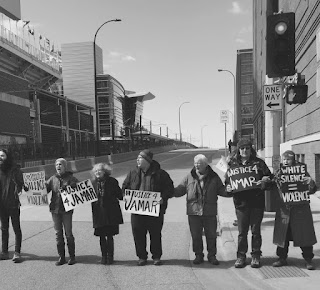 Part of the time outside the Twins stadium I stood arm-in-arm with my dear friend, Kathy Kelly. She had told me in the past,  “Where you stand determines what you see.” I would add to that, “With whom you stand can also change your perspective.” Following the leadership of Lena Gardner and Candace Montgomery of Black Lives Matter Minneapolis, the inspiration of Rev. Osagyefo Sekou of the Fellowship of Reconciliation, the love and compassion for the water evidenced by Sharon Day of the Indigenous People’s Task Force, the passion of the action coordinators from the Black Liberation Project, and the insights and observations of my numerous Muslim friends has helped give this 65 year-old male who has for decades identified himself as “white” a window into a world of exciting and challenging diversity. Thank you! 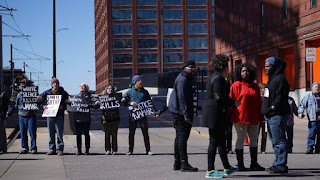 As our signs read, “White silence kills.” Let’s break the silence among those who identify in our culture as “white” and recognize that racism against black people hurts me and you. Failure to include queer and transgender people diminishes all of us. We have much to learn (and repent for) from our indigenous neighbors. Muslims need to hear you embody a message of “welcome!” I don’t want to live in the mythical American “melting pot”. We don’t all need to blend together into some unidentifiable porridge; rather let’s embrace our diversity as we embrace one another and determine to reject the cancer of white supremacy which has poisoned our world. And, as Rev. Sekou beautifully and forcefully remind us in our training for “militant nonviolence”, we do this work out of “deep abiding love” and filled with “joy”.

Posted by Steve Clemens at 3:18 PM No comments: