The Islamic calendar starts when the Prophet Mohammed travels from Mecca to Medina and is 11 days shorter than the Gregorian calendar. The month of Muharram marks the beginning of the New Year and is a time for celebration - yet it is muted here because 10 days later, a time called Ashura, Imam Hussein, son of Imam Ali, was killed so a time of mourning coincides with the New Year, especially for Shia Muslims who revere Ali and Hussein in a special way. The 10 days leading up to Ashura, which occurs on November 24th this year are days of mourning. Because he was killed in Karbala, there will be a pilgrimage from Najaf to Karbala starting soon and many people on the streets are wearing black and black flags decorate much of the twin cities of Najaf and Kufa here. One of our Iraqi friends tells Joan and I how to appropriately greet others when it is both a New Year and a time of mourning. He translates the Arabic into: “May Allah be pleased with your sorrow”.

One of the delegation members noted on the internet this morning that there had been some car bombings north of Baghdad and we notice right away as we step out of the Governor’s guest house that security has been increased as we see three military personnel waiting outside before we drive off for today’s adventures. We have not requested the security but it is evident that the Governor wants to insure the safety of his guests even though reports show the homicide rate of Najaf is significantly lower than in the US as a whole – by a factor of four!

Today is also Friday, the traditional day of worship for Muslims so we are essentially taking the day off as a delegation and have instead been invited to spend the holiday in the homes of two key Muslim Peacemaker Team members, Dr. Azar Maluki, the dermatologist, and Zuhair Sharba, the Chamber of Commerce head with their families. It is a wonderful and energy-giving experience – especially to engage with children in their homes. Dr. Azar and his wife Shema have three children in a beautiful new home just blocks from the University where he teaches and practices. The home took several years to complete and it is stunning, most notably the ornate ceiling designs using mirrors. 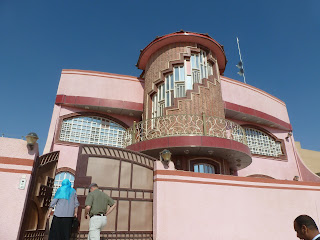 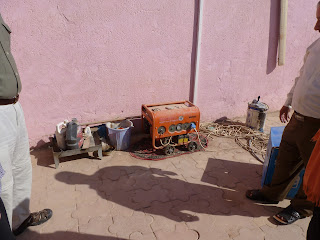 After introductions, we sit and talk and eat – tea is served, a cake was made by Shema with the inscription of “Minnesota and Najaf” as well as other sweets and fruit are passed among us. Several delegation members played games with the children and Shema beamed throughout, obviously pleased to host these guests in her home. A tour of the home by an obviously proud Iraqi professional concluded our 2-hour visit and we left with gratitude for this glimpse of Iraqi home life. Dr. Azar has his own small generator outside his back door but tells us the national government usually increases the amount and duration of electricity from the national government to this area during Ashura because of the large increase of religious visitors present. We transferred into an 11 passenger van (made in Korea) and headed across town to Zuhair’s abode. 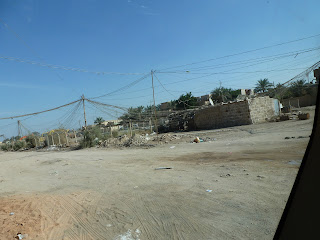 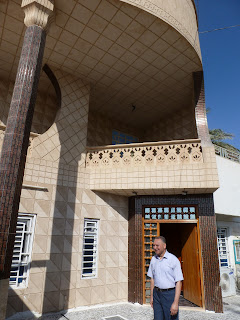 Just before entering Zuhair’s house, across the street was a neighborhood generator with multitudes of wires entering and exiting the mud brick structure. Maybe it was a portend for the future? The Sharba residence was built in the 1980s before economic sanctions crippled most of Iraq if you weren’t related to Saddam Hussein or his Baath Party. He, too, seems proud to have us as honored guests in his home. Two of his four daughters and his son are there to greet us but later we are told it was a third sister, a married adult, who cooked the entire meal – and what a meal it was. None of us can get over the huge amounts of delicious foods are placed before us with a seldom-ending plea for us to take more. Today’s New Years  feast was preceded with fruit, candied nuts and tea before we moved to the dining room table almost 3 hours later. There we encountered two types of rice, a traditional bowl of a stew-like combination of hummus, meat, and tomato, a beautiful plate of vegetables and olives, and a huge platter of chicken, lamb, and beef and chicken sharwma. There was that much for every 4-5 of us and after sitting down, we are handed a bowl of soup in addition. Sodas, water, and yogurt drinks also were included in the feast that seemed to engulf the entire table. It made many American Thanksgiving meals look anemic. 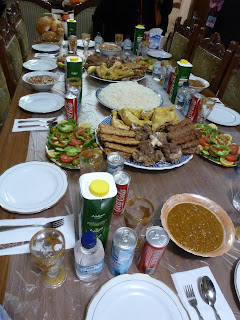 Our host relished the opportunity to begin serving us by providing huge portions of the one type of rice on our plates and each of us knew we might never go hungry again after seeing what lay ahead. After more than enough, we retired back into the original sitting area to enjoy fresh melon fruit, chocolate candy and nuts, and coffee or tea. Fortunately the 3-4 power outages didn’t begin until after we had finished the meal and had also concluded the giving of gifts to one another. David had thoughtfully brought some balloons which the grand children and adults enjoyed. After more than 5 hours with this second Iraqi family, we were ready to give them the rest of the evening together as we returned to the guest house.

The generosity and hospitality of these friends and this culture are lessons we can take to heart as we complete our first full week here. We hope to travel some in the days ahead but our schedule always seems to need some adjusting so we are learning to go with the flow.
Posted by Steve Clemens at 3:54 PM