The day started with Kathy getting fashion tips from Hiba. She fixes Kathy’s hijab first and then goes to adjust Joan’s but decides Joan has already learned how to do it the proper way! Although Fr. David has a lot of experience in Palestine, Iraq, and other Middle Eastern locations, one of the staff at the guest house insists on wearing the keffeyah differently. David allows for the adjustment although I’m sure it was just a matter of local preference. 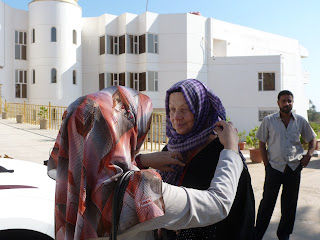 After an hour of shopping in the souk of the old city, we were invited to lunch at the Guest House of the Shrine of Ali. A simple meal, very tasty and sufficient. Then we are told that our friend Zuhair wishes to greet us nearby. I knew Zuhair as the head of the Najaf Chamber of Commerce, but he seems to wear many hats around here. After being escorted into the large reception room behind the Shrine of Imam Ali, we are served tea, water, and coffee as we sat around visiting. Then Zuhair shows us the model of the on-going and planned construction around the Shrine to accommodate the millions of visitors who come each year. Under Saddam there was little improvements allowed in this section of the bold city we are told but since 2005 there are ambitious plans for improvements to this third holiest site for Shia Muslims. Zuhair also gifts us with a book translating a message from Imam Ali about the role and style of leadership before inviting us to his office upstairs. Only then does it dawn on me that having an office in this building means he has a very significant role at the Shire and we learn he is on the Board of Directors and is helping oversee part of the $600 million construction project using his capacity as an engineer and businessman. 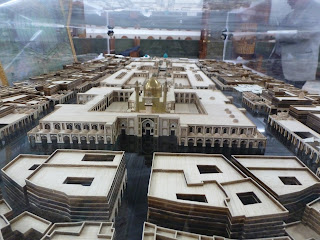 After a very engaging visit with him, we hustle back to our transport vehicles to get to the bridge crossing the Euphrates in Kufa for our Bridge Vigil in solidarity with the on-going Lake Street Bridge Vigil which happens every Wednesday afternoon/evening in Minneapolis. I brought along a rainbow striped “PEACE” flag and the Muslim Peacemaker Team had numerous other banners made with messages such as “Plant a Tree … Harvest Peace”, “Iraqi people are our brothers and sisters”, “Minneapolis is our Sister City”, Najaf is our Sister City”, “If you want peace, join us”, “Peace begins with me … and You”, “Kindness is Charity”, “Allah is Peace … Peace is Islam”. 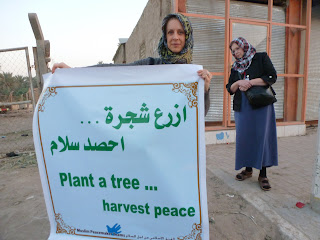 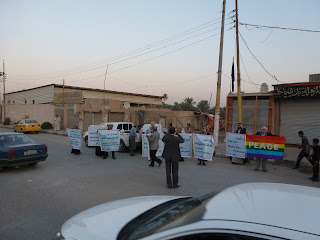 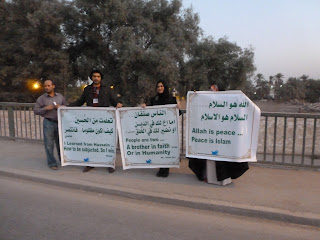 On the bridge, traffic moved slowly so I was able to call out “Salaam” or “Salaam Alekium”, peace and peace be upon you, smiling broadly in friendship and hope. Several stopped and asked where I was from and I told them “America” and the at-first puzzled look gradually turned to a smile and the young man said, “Good! shukran” (thank you). I remembered my inaugural demonstration in Baghdad almost 10 years ago in front of the United Nations Development Office shortly before President Bush commenced this destructive war. We were supporting Hans Blix and the UN weapons inspectors rather than the mad rush to war. I held a “No War” sign on Abu Nuwas Street facing the traffic on that busy Baghdad artery and saw faces smile and horns blowing in support. I had the same feeling tonight, looking into the faces of Iraqis, no longer an “enemy” as we work hard to become both friends and peacemakers together. With the able partnership of the Muslim Peacemaker Team we are making inroads in our demands for a culture od peace. We can always use more “fellow travelers” on the road to reconciliation.
Posted by Steve Clemens at 3:10 PM