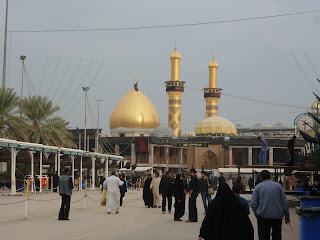 The dinner was held in one of Najaf’s best restaurants according to the former owner of Sinbad’s in south Minneapolis who sold his business to return to help his home nation rebuild during the war. Sami Rasouli and another member of his Muslim Peacemaker Team escorted us to the Holy Shrine of Imam Hussein in Karbala, about an hours drive north of Najaf if one doesn’t allow for the 4-5 checkpoints we must encounter on the 80 kilometer trip. After returning to Najaf and seated at the restaurant, Joan and I were chatting with Mohammed across the table. Mohammed mentioned to me that he had liked what I had written in my blogs which he found cross-posted on my Facebook page and then asked Joan if the “Joan Haan” on his Facebook search was her page. After she affirmed that she was, he sent her a “friend request” and they were connected on Facebook.

Joan, in her direct manner, looked at Mohammed and asked him why his name appeared as “Eng Mohammed” on her screen, commenting that it was a name she hadn’t heard before in Arabic. I said I thought it stood for “engineer” and Mohammed laughed and said, “Yes, I’m an engineer”. With so many Mohammeds, Alis, Ahmeds, etc here, other abbreviations are in order - just like one of my other new friends, Ahmed, who has tacked “Pre” on to his Facebook name because he is a Petrochemical Resources Engineer in his paying job. Then Joan suggested we talk face-to-face rather than text each other across the table. Light-hearted conversation continued through the meal and it wasn’t until the tea was served that conversation for us got serious very quickly.

Our host, a very successful contractor who has made a significant amount of money recently in helping rebuild Najaf since 2004, stood up as Sami translated. The first words were quite shocking to me: “Before you came here, the US was known as the #1 killer of Iraqis. But you came in peace. And today you did the most difficult thing in taking the time and effort to visit the Shrine of Imam Hussein. It shows that you come as friends and God is bringing us all closer together. Now children and adults [here in Najaf] can see a new face of Americans. You came and provided water filters with Sami under the Water For Peace, you sent letters to schoolchildren. Now reconciliation is happening.”

Joan leaned over the table to have better eye contact with our host. “Actually you, with your words to us have initiated this reconciliation with us. And we are so very grateful for your kind words.” All of us in the delegation are acutely aware of how dangerous this reconciling work can be – for both sides. There are those who want to keep us apart, who profit by our animosity and the weapons produced to “protect” ourselves from the other. For Iraqis, they risk being seen as collaborators with the nation whose “Shock and Awe” campaign was designed to force an immediate cowering surrender. For American peacemakers, we risk getting identified with “Muslims”, “terrorists”, and the “other”.

Only as we reach out and offer the olive branch to each other, to look across the table and see the other as our sister, our brother can that healing salve of reconciliation be allowed to help relieve the festering boil of resentment and retaliation. “Reconciliation is now happening”, our host continued. “You’ve come here to help us [with water filters, letters for peace, …], now that Sami has helped me secure a visa [for travel to the US], maybe I can come to your country and help you.” He continued, remarking about people losing homes to foreclosure and other ills in the US.

And then he gave us the invitation: next time, don’t wait for the Governor’s invitation. You don’t even need to contact the Governor – I’m inviting you, I’ll put you up. I want you to return –soon!

It was a long day. The trip to Karbala dusty. I was tired, full, ready to stretch out on my bed and think about what I could write for my blog today. In those brief minutes, with those heartfelt words, I/we were revived. Sami said in his translation, “His heart is full of love and he just keeps repeating how glad he is to be here with you.” This is what the Iraqi & American Reconciliation Project is all about: getting on with the business of healing peoples whose heart has been broken and now want to be whole again. Thank you Hussein for opening your heart to us. May we always be ready to reciprocate in kind.
Posted by Steve Clemens at 3:46 PM