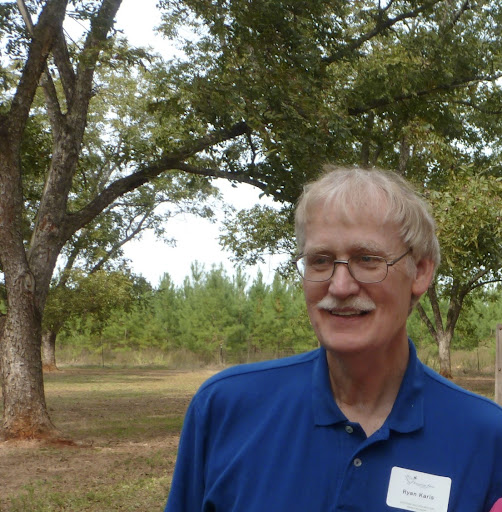 I knew him first as Ryan Delp, the quiet Quaker from rural Indiana who was one of the mainstays of the Koinonia Partners Construction Crew when we first met in 1975 in rural southwestern Georgia. A “gentle giant” – he was taller than any of the other construction crew – Ryan, trained as an engineer at Purdue, laid out the corners of the lots and helped direct the design and construction of the single-family homes they helped build, first in what became known as Koinonia Village and then Forest Park for families who became homeowners for the first time. Some of them were former tenant farmers and these houses became their first opportunity to actually own a home and begin to build generational stability.

I was there when Karen West was in my volunteer group in 1975 and as their relationship blossomed into a marriage, they chose a new name, Karis, a word from the Greek New Testament meaning Grace of God, as their identity of this partnership which has blessed many others these past 45 years.

Ryan was one of the first three or four Habitat for Humanity international “volunteers”, surveying Ntondo, a small village in Zaire at the invitation/encouragement of Millard Fuller. How about that for a honeymoon?

He helped design and build the first passive solar house for Koinonia and then he and Karen invited Christine and I to move in with them as its first residents. If memory serves me correctly, we ate popcorn every night! It also marked the beginning of our long tradition of playing cards and telling stories.

He and Karen were two of the six inaugural members of Jubilee Partners, pioneers – helping build the first structures of this community in northwest Georgia through which thousands of refugees have come. Their living in tents while the first houses were built are warm memories Christine and I share with them.

Ryan and Karen regaled us with stories of their living in a refugee camp in Thailand to better understand the refugees coming from southeast Asia in the aftermath of the US War on Vietnam; then going to Cuernavaca, Mexico to learn Spanish to better work with a growing flood of refugees and asylum seekers from Central America; and then helping coordinate the Ano de Jubileo program that helped hundreds if not thousands of families and individuals find a new home and safety in Canada after the US shut the doors of compassion in the 1980s. He and I shared many bus trips to the southeast Texas border with Mexico and returning to Jubilee in north Georgia with a bus-load of refugees – or trips from Jubilee to Winnipeg, Manitoba, or to London and/or Toronto, Ontario to their new asylum homes.

But refugees were not Ryan’s only concern. As the Reagan White House years “progressed”, Ryan and his fellow Jubilee members decided to find ways to track and protest the shipment of nuclear weapons through our state and the southeastern part of the country as, what was then known as the “White Train” carried nuclear warheads from the assembly plant, Pantex, outside of Amarillo, Texas to the submarine base at Charleston, South Carolina and later to a new Trident submarine base built at Kings Bay, Georgia. I remember more than once Ryan called me in the middle of the night to tell me a train-load of nukes was headed our way – it had just left Memphis, or Anniston, or some other point and would soon be coming down Main Street in Montezuma, GA so we could gather our signs, candles, and banner to vigil along the tracks. That banner, a full-size sheet was emblazoned with the Scripture passage: “Not by might, nor by power, but by my Spirit.” So Ryan’s passion for nonviolence was one of influences that warmed my heart as I sat in a cold jail cell after blocking that train.

As work and ministry continued to evolve at Jubilee, so did a family grow. Ryan and Karen invited us to join them at the Atlanta airport as they met their new son, Andrew, as he was carried off the airplane after arriving from his native Korea. We also celebrated with them as Rebecka joined their family.

Christine and I made numerous weekend (and occasionally months-long) trips to north Georgia to help build more structures at Jubilee for the growing community as well as the refugee ministry. With a mutual friend, Robbie, we would drive into nearby Athens for a dinner or to go to the food bank and end up in the parking lot of the discount grocery store with a ½ gallon of ice cream and 6 spoons. We’d sit, laugh, tell stories, and enjoy being together. Later, as Robbie fell in love and married a refugee from Cambodia who had come through Jubilee with her family, Chou also joined us when we’d visit.

Ryan’s birthday, December 28 th , always fell on what is called in the Christian calendar, The Feast of the Holy Innocents – when the church remembers the story of Jesus fleeing with his family to Egypt as a refugee to escape the murderous intent of King Herod. We would often have a public witness against nuclear weapons (which threatened children all over the world) or for immigrants and refugees or those on death row on that day. So, after a solemn vigil (or occasional acts of civil disobedience) during the day, we switched gears and celebrated Ryan’s birth in the evening – usually with ice cream, occasionally with cake too..

After 10 years of service at Jubilee, they moved to the Twin Cities just prior to the birth of Emily, their third child, in 1988. They joined a growing, fairly-new, faith community, the Community of St. Martin, that embraced their convictions of nonviolence, service to others, and simpler or compassionate living. When Christine and I were ready to take a Sabbatical year away from Koinonia, Ryan and Karen asked us to join them in the Twin Cities where the Community of St. Martin could provide us space in a hospitality house and help us find work and be part of their worship group. Ryan was already continuing his former construction work with a local Habitat for Humanity affiliate and when that organization decided to grow its capacity, he asked me if I’d like to consider coming to work with him. Christine and I decided the community and the employment prospects were a good change for us and we decided to put down roots in the neighborhood where many of the faith community lived – and I went to work at Habitat with Ryan as my new supervisor.

Ever since I’ve known Ryan and Karen, they have had a special passion for the mountains, streams, and beauty of Karen’s home state of Montana. When they returned from a road trip to the Bozeman/Livingston area, Ryan would haul out the slide projector and give us a report on their adventures. Karen relished the wonders of nature and the creatures, especially the birds, they encountered, and Ryan often had the visual record made with his camera. Those adventures would include not just hacking out a village site in central Africa near the Congo River, or the stark challenges of a refugee camp in Thailand, but also trips to South Korea they took as each of their three adopted children traveled with them to see their own homeland; then a trip to Iceland, taking Christine with them.

Since Karen finally retired from teaching in the Minneapolis Public Schools, and with a brief (apparent) lull in the Covid crisis, we planned to finally take them with us for a week in Cancun, Mexico at the end of January. Alas, it was not to be.

Ryan embodied the Quaker roots he had - comfortable with silence, looking for consensus, committed to nonviolent actions and solutions. People relied on his dependability and, when he shared his thoughts, others realized how engaged he was in the decision-making process.

I love you, Ryan. Thanks for being a valued friend, companion, example, accompaniment, and leader. You were often a calming present in a storm while also providing direction for not only surviving it but finding a way out. As you transition to that “great cloud of witnesses”, may your gentle spirit guide your way home. Rest in that grace of our Creator.

Posted by Steve Clemens at 5:22 PM

Tony, I don't have your email. Please check Caring Bridge for Ryan :
https://www.caringbridge.org/visit/ryankaris

Very nice account of a compassionate socially dedicated life. Thank you Steve for so beautifully expressing your reflections. Thank you Ryan for being you.