The Things I Carried To My Arrest 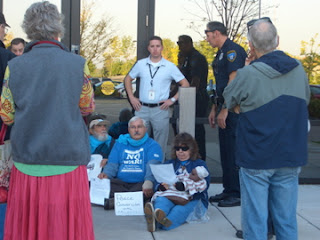 The Accoutrements of Arrest by Steve Clemens. September 28, 2011
Usually when I risk arrest in an action of nonviolent civil disobedience I try to only carry the bare essentials: my drivers license/ID and possibly some cash if I will try to make bail. I even remove my wedding ring if I’m expecting to end up in jail. Today, however, for our last arrest witness at Alliant Techsystems, Minnesota’s largest war profiteer, I carried a Civil Arrest Warrant for ATK’s CEO, Mark DeYoung. I also wore my blue scarf brought home from Afghanistan this Spring as a symbol of solidarity with nonviolent peacemakers in Kabul and Bamiyan Province.
I wore my Blue T-shirt with the bold lettering of “No War” coupled with “Love your enemies” and “our God is Love, our Gospel is Peace” statements.
I also carried excerpts of International Law provisions from the Hague and Geneva Treaties, resolutions from the United Nations, statements from the International Committee of the Red Cross, and statements from experts about the illegality of depleted uranium weapons. I carried a copy of my personal letter to CEO DeYoung as well.
Alliant Techsystems, also well known by their stock-ticker abbreviation as ATK, just recently announced that they are moving their corporate headquarters from Eden Prairie, MN to Arlington, VA so they can be close to their preferred customer, the five-sided Department of War headquarters also known as the Pentagon. Here in Minnesota they are a big fish in a small pond when it comes to corporate sales; in the Washington, DC area, close to the center of pork barrel politics and military contracts, they will just be one of many trying to sidle up to the hog trough.
Our AlliantACTION vigil group, usually about 20-30 stalwart peacemakers, have come every Wednesday morning for more than 15 years running from 7-8 AM to hold signs, sing songs, and gather together to call for ATK to cease production of illegal and indiscriminate weapons and instead use their inventive engineering genius to create products that are life-giving and useful. “Peace conversion with no loss of jobs” is one of our on-going mantras. It is coupled with another, a query: “Who profits? Who dies?”
We carry few illusions that our act of nonviolent civil disobedience today will result in a radical change in policy for a corporation which has profited from weapons of death and threats of annihilation. This spin-off of Honeywell’s weapons division (after years of nonviolent protest at their south Minneapolis corporate headquarters organized by The Honeywell Project), ATK has the notorious distinction of being one of our nation’s largest manufacturer of landmines, cluster bombs, and depleted uranium weapons.
To further add to this pantheon of what the United Nations lists as “weapons of mass or indiscriminate destruction” (and, as such are illegal to manufacture, sell, or use), ATK also makes components for nuclear weapons, including the nuclear missile for the Trident Submarine. As if that were not enough, they have developed a gun that purports to “shoot around corners”, the XM-25 which is now being field-tested in Afghanistan. There are also reports that Alliant is also providing components for the Pentagon’s latest obsession, the un-manned aerial vehicle, aka the drone. While ostensibly targeted at Taliban leaders, scores of reports of innocent civilians being killed in Afghanistan and Pakistan has led hundreds if not thousands to join the insurgency to seek revenge for the attacks on family members.
Our act of civil disobedience comes just four days before the birthday of the premier disciple of nonviolence, Mahatma Gandhi. On October 2, the AlliantACTION vigil group will return to the front doors of the newly vacated corporate headquarters. The move of the corporate officers is to take place on October 1 but Gandhi’s birthday comes only once a year so we will gather to celebrate his life and witness as well as the power and the blessing our vigil circle has provided to us over the past 15 years. It was not our goal to “chase” ATK out of Minnesota; our state can use good paying jobs. We just want those jobs to affirm life rather than find ever more creative ways to destroy it.
__________________________
My letter to Mark DeYoung:


September 28, 2011
Mr. Mark DeYoung, CEO
Alliant Techsystems
7480 Flying Cloud Drive
Eden Prairie, MN 55344-3720
Dear Mr. DeYoung,
I come to ATK Headquarters today with a heavy heart. The last time I approached this front door, just a few weeks shy of one year ago, it was in response to your gracious agreement to meet with a small group of us from the weekly Alliant ACTION vigil. As you may recall, during that meeting you told us “We are not in that business” in reference to depleted uranium weapons and went on to say that ATK always “pick and choose what contracts we will go after” – or words to that effect since you requested that I hand over all my written notes as we left the meeting so these quotes are my best recollection of what was said last October 11th.
Although I am not a shareholder of ATK stock, several members of our vigil group are and they reported back to those of us vigiling outside or the morning of your annual shareholders meeting in August that you admitted in that meeting that ATK is assembling munitions containing depleted uranium provided for you by the U.S. Government.
You might recall during our meeting with you we gave you (and your legal counsel who was also present) a lengthy document identified as “Employee Liabilities of Weapons Manufacturers Under International Law”. Included in that document was a resolution passed by the United Nations Commission on Human Rights in 1996 which stated categorically that weapons containing depleted uranium are “weapons of mass or indiscriminate destruction” and “the production, sale and use of such weapons are incompatible with international human rights and humanitarian law”.
Therefore, we come with the intent of serving you with a Citizens Arrest Warrant, charging you with both the production and sale of illegal weapons according to Treaties signed by the U.S. Government. It has always been the intent of our vigil group to advocate “peace conversion with no loss of jobs” for the company you lead but since you have decided to move the corporate headquarters to the Washington, DC area at the end of this week, we felt we needed to take this nonviolent action.
Sincerely, in Peace,
Stephen D. Clemens
Member, Alliant ACTION Vigil
Posted by Steve Clemens at 7:45 AM